In my search for an easy, stable and manageable backup tool, I tested Acronis True Image Server 9.5 (Enterprise Edition).
My goal was to backup several Windows 2003 servers and some Linux CentOS 5.2 servers.

I experienced a lot of problems and weird things;

3) The GUI works slow and is very unnatural; When i want to schedule a Task on several machines, i need to start the Remote Management Console, connect to the “Group Server”, switch to “Group Task Management” and schedule a task. I then see a ‘Group Task’. Since it doesn’t always Apply that Group Task to the machines (even if it says: “Successfully applied”), i want to check the task on the machines. I can’t just Click to a machine from this view, instead, i need to Disconnect from the Group Server. Connect to a Remote Agent click “Show Tasks” there.

4) They call it “Group Server”, but it does nothing else than scheduling a Group Task (actually scheduling a task on all the selected machines!).
The only extra option you have is to shift the backup start time by X minutes. (I set it to 30minutes). Now the Group Server is out of the game! It doesn’t interact with the Tasks (so it doesn’t wait with a next backup while other backups are running). It’s just a Group-Task Scheduler, Group-Server is a bit overrated!

5) You can update an Agent on a Remote Machine but you can’t see what version it already has..

6) When i’m logged in to the Group Server i can see all the Agents, but there is no way to ‘refresh” this window. When i turn on a client which was Off (or unreachable) it still says Unreachable, even re-connecting to the Group Server doesn’t refresh this. I had to Restart the “Acronis Group Server” service.

7) There is no way to change the licensing server without reinstalling all agents! (i just want to run this “Licensing Server” role on a different machine)

8) Last but not least: You can’t fully uninstall Acronis True Image Server!
Well, you can “uninstall” it from the “Add or Remove Programs” but it leaves some folders and files in C:\Program Files\Common Files\Acronis\…
It also leaves a lot of registry keys in your Registry, some of them you can’t even remove with regedit!
On some servers i got this message: 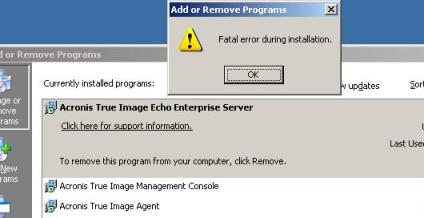 which didn’t left me much choices.. ;)