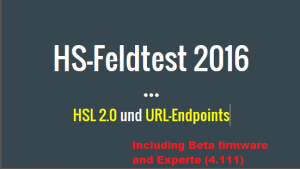 Back as never before with this new blog. Upcomming weeks a lot of news, cool stuff and hacks will be posted here! I’m full with ideas and supported by many of you who e-mail me with secrets and hacks. 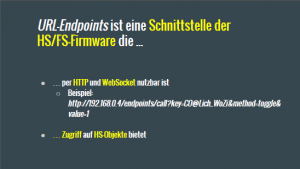 URL endpoints allow you to direcly toggle HS-objects by HTTP or websocket, example:
http://192.168.0.4/endpoints/call?key=CO@Lich_WoZi&method=toggle&
value=1
Note that HS-objects can also be the Camera-archive, Scenes or Calender.

This has endless possibilities, like IFTTT, easy integration with Amazon Echo or Apple Homekit (and Siri), Geofence-Apps, and more.
But the question is what will Gira make of it? Are they building a new VISU (instead of the QuadClient)? 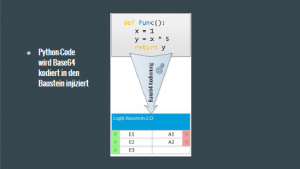 HSL2.0 is a Baustein which can now parse full-blown Python Code.
The logic can be easily made (written) and tested offsite (on another PC) using a Logik-Simulator.
You can use the standard functions of a framework like logging, HTTP server, UDP-Unicast, etc.

Don’t think that both features (URL Endpoints and HSL2.0) are for expert users, the features itself are, but endusers will take full advantage of even cooler building blocks which are build by experts (HSL2.0) and take advantage of IFTTT integration (an IFTTT recipe can be written by an expert user and used by everyone) or other integrations.

Disclaimer: I got mailed the link which leads to a MEGA download. It contains a .ZIP file with the presentation.pdf, documentation, framework, Simulator, examples and another one with the Experte 4.111 (including the firmware). The firmware is before the release of 4.5.0.
Don’t blame me for doing illegal things or violating copyright, I’m just a ‘social’ guy with a blog. Don’t blame the messenger.