How to use/format Native 4Kn drives in Synology or NAS

A few years ago I started using 4Kn drives in my storage (Open-E and Synology NAS). You had to decide for a 4Kn (native) drive or a 512-byte drive when buying it.

Now, a few years later, companies like Western Digital (HGST) and Seagate come with ‘Advanced Format’ drives, it’s one drive which you can use in 512-byte mode or 4Kn mode. I recently bought two Western Digital (HGST) Ultrastar DC HC550 (18TB) drives and had some struggles with them to use them in my Synology NAS as 4Kn drives. See how I fixed it..

I inserted the drives in my Synology (DS1817+) and when I wanted to create a new Volume it showed me the following: 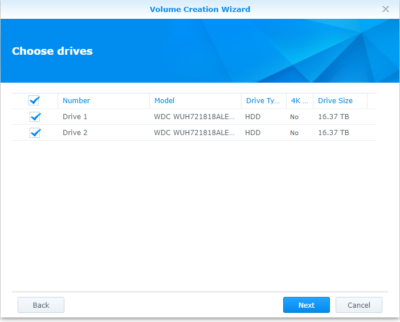 So I opened an SSH session to the Synology and did an fdisk --list which showed me it was having a sectors of 512 bytes instead of 4096 bytes:

Even after connecting the disk to my Laptop using an Aptgtek USB to SATA converter and formatting it using Windows 10 with a different sector size, it still showed as non 4Kn drive in the Synology.

Then I used the tool: “Hugo” which is a Western Digital proprietary tool and can be downloaded here.
I used version 7.0.3 for Windows and used the following commands:

To detect the disk:

To format the disk:

Even though it fails to format the disk, it does write the sector size / partition table to it and when you insert the drive in you Synology now, it will show you 4096 byte sector size and you can now create your 4Kn volume! 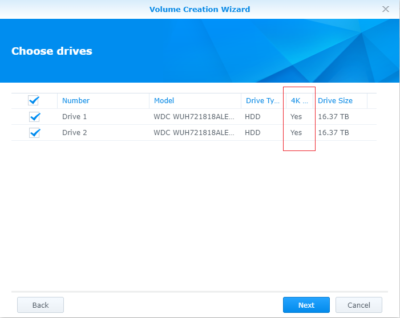 Note: I first used Hugo v7.2.6 without success, then when I used Hugo v7.0.3 it notified me of using the -n max parameter, which did the trick.