New mainboard in Samsung TV and the Secret Service Menu

I repaired a broken Samsung TV (UE55ES8000) last month, however the same instructions should apply to other Samsung models.
The TV made a ‘clicking sound’ all the time and couldn’t turn ON or OFF. The screen stayed black. My first thought was the Power board, a dried capacitor, a (physical) broken part on it or a software problem.
I took the TV from the wall, removed the back cover of it and saw 2 boards: a Power board and a System board. No damage, No dried capacitors, No black/fried parts.. I even tried to clear the EEPROM by shorting the VCC and SDA pin on the systemboard but No success.. 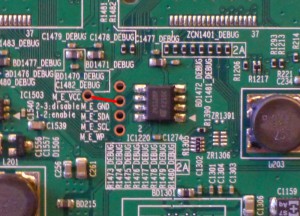 Read below how I fixed it.

Luckely I just found a post somewhere from another guy who replaced his power board and didn’t solve the problem, so I tried my luck on a new System board (bought from Ebay for about 130$, model: BN41-01800B, manufactured 2012-02)

After replacing the mainboard, it worked again!

However, I noticed the following:

I first tried the tool ruSamsungTVCommunicator but it doesn’t work anymore on the latest firmware like the ‘2021’. Problem is that it doesn’t accept the secret codes via the network interface anymore so I had to use another method using IR:

Thanks to Samygo website for the photo and information.